BUCHAREST
Home
Methods
Projects
Urban Agriculture in Mogosoaia
We chose to address the situation in the context by establishing cooperation between the resources in urban spaces and the agriculture of Mogosoaia.
That is, urban space meets farmland as our strategies. We aim to discover the potential of the neighborhood and form a new lifestyle through a series of facilities: 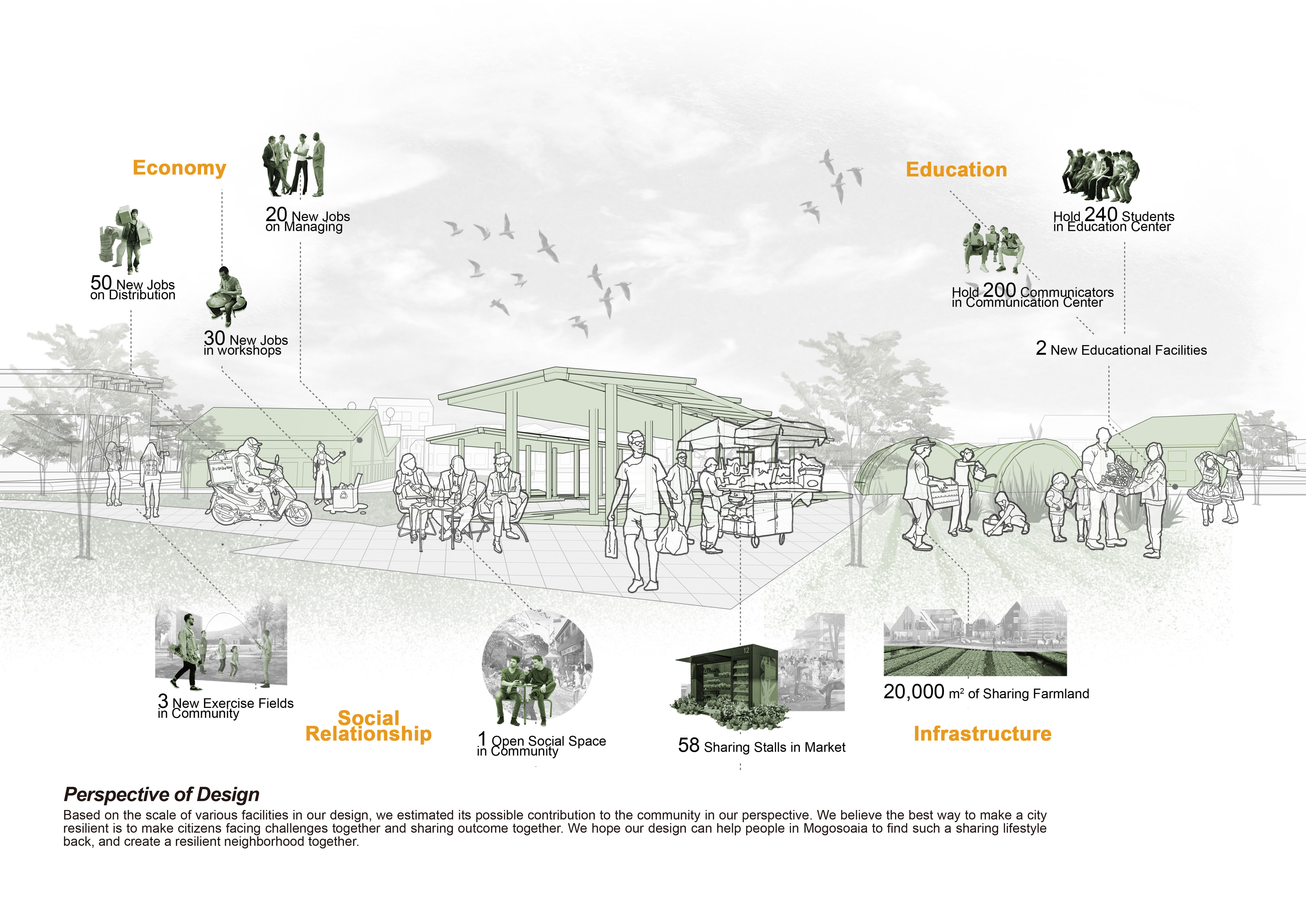 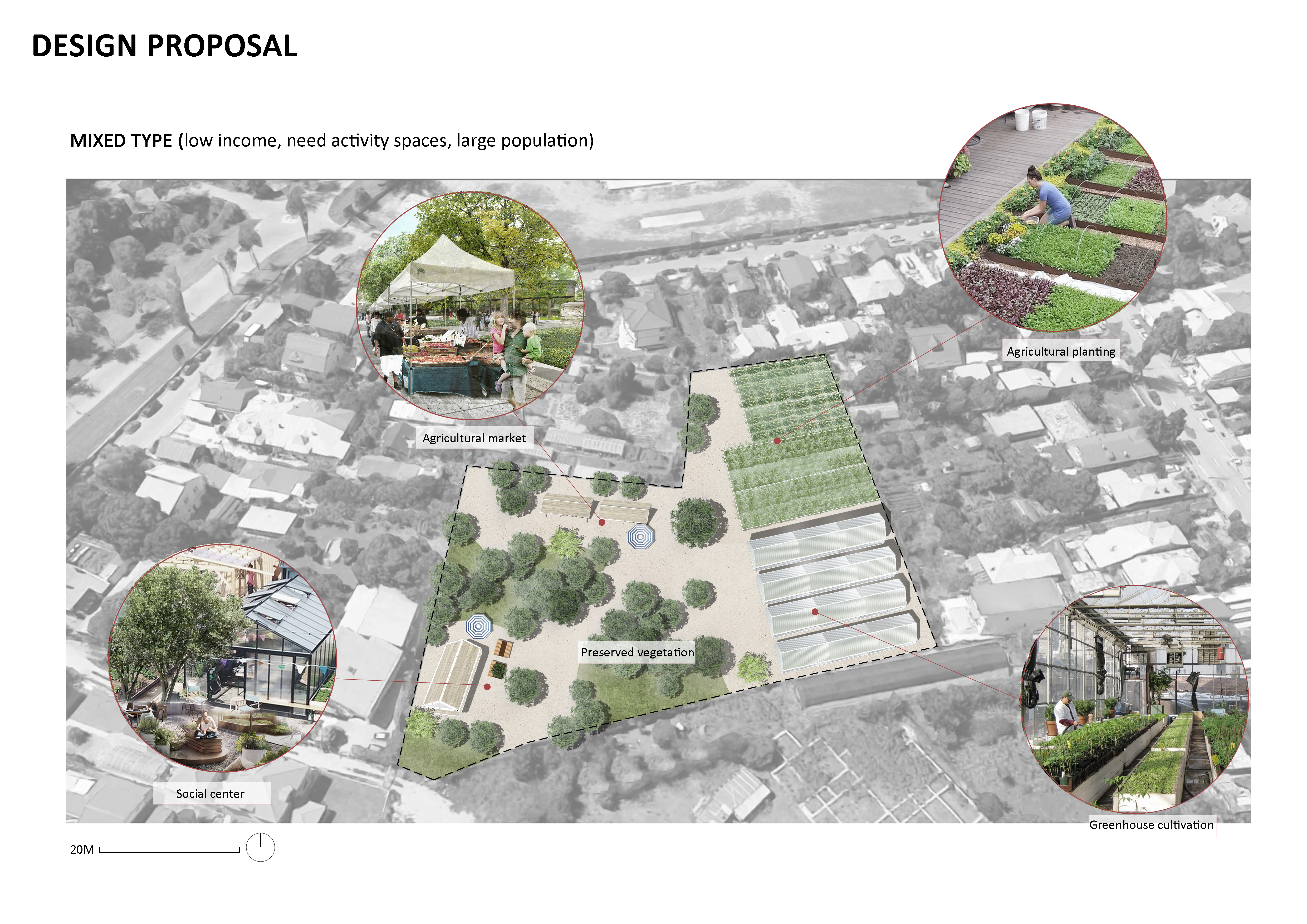 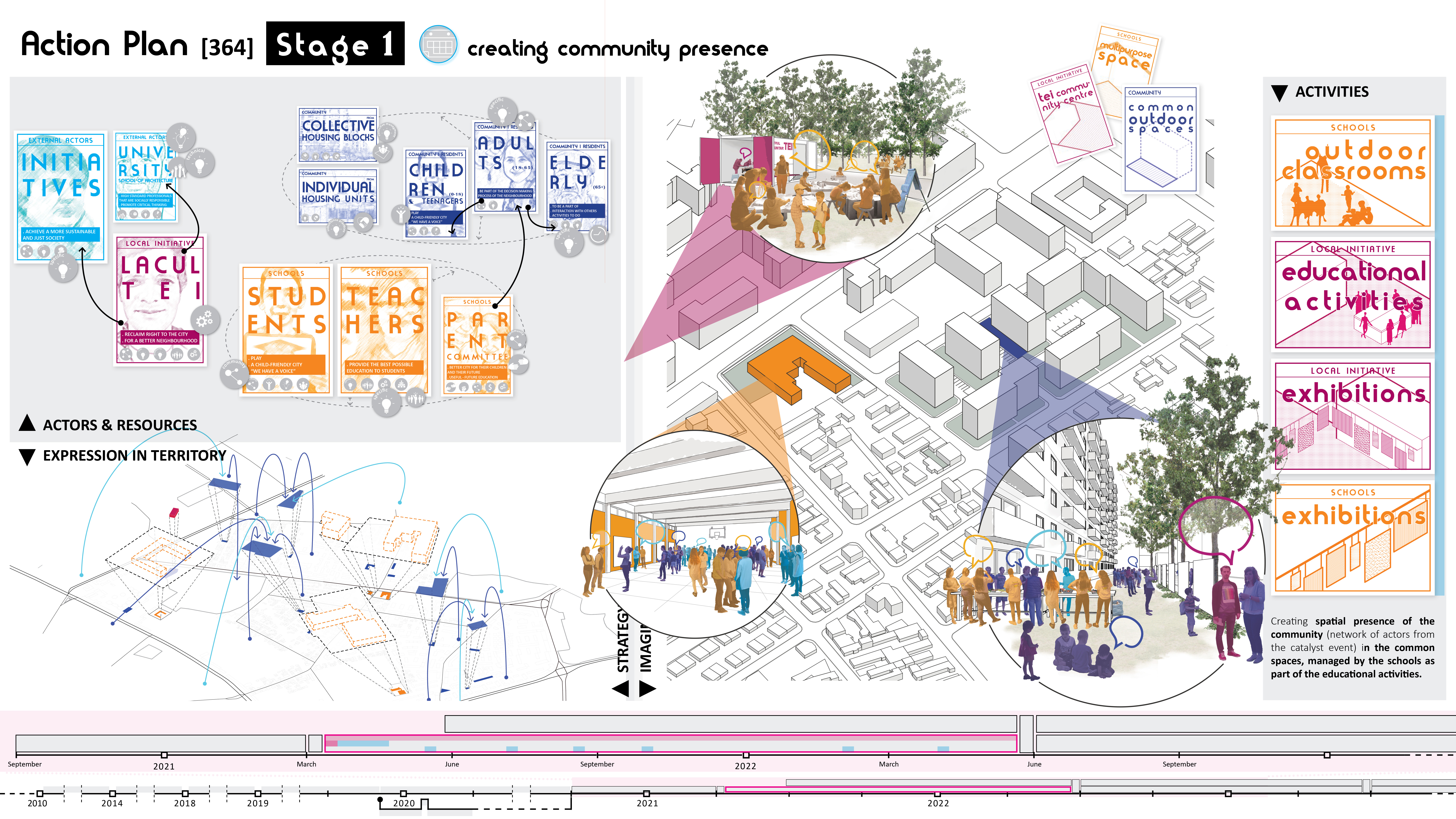 Co-Producing In-Between Practices
Exploring Bucharest as a city in constant conflict between community and authorities, we define an in-between space of resilient and resourceful actions. Focusing on the actions of the civic group Lacul Tei, the Tei Community Centre, and its current latent state, this project proposes a mechanism to support the long term co-production of in between practices, citizen empowerment, and self-development. Positioning the design team as Urban Curators, a strategy is created by rearranging existing actors, resources, relations, and actions. By contrary, what is important is the process and how the spaces, activities and relations developed constitute the framework of collaboration, and promote self-managed development, based on the community’s internal needs.
Resilient Re-Using of Public Facilities
Our strategy is to use the Bazilescu Theatre as physical site to design the catalyst event:
reopen schools as community sports space with the consent of local citizens. And then seek to expand it by reuse schools as education hubs to enhance community awareness and capacity to participate in solving community issues. Finally, the schools and the theatre, together with the Urboteca form a Bazilescu participative Loop for communities to play an active role in managing community issues.
Garden Hub Bucaresti
In the center of Bucharest, a clear urban axis built during the socialist period divides the city into two parts. The geographical division results in the
differences in economical, ecological, and social development between North and South. Our research attempts to find a approach to strengthen the urban continuity. So we design garden hub to achieve city resilience by using open social resources and encouraging shared cooperation in the city. 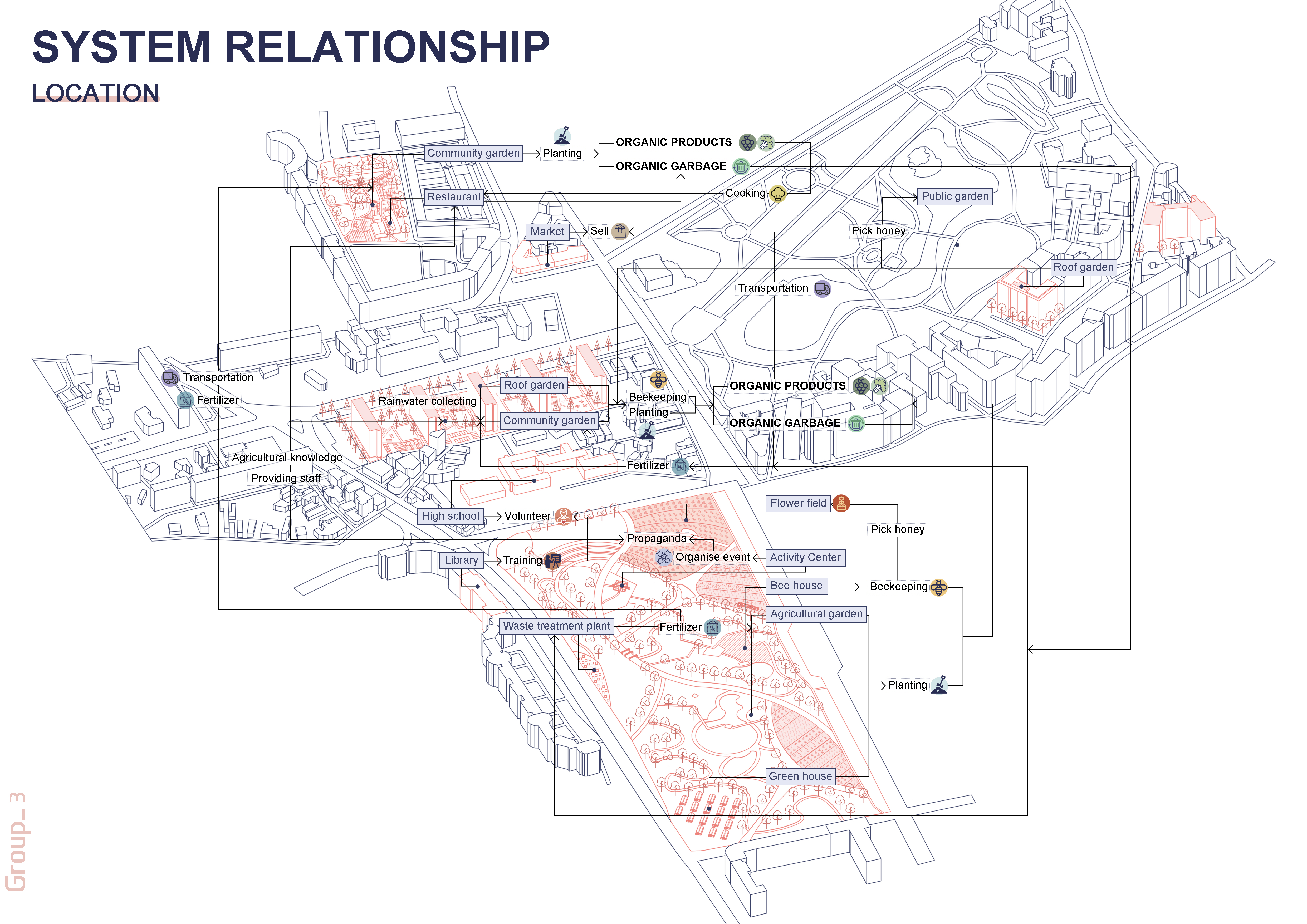 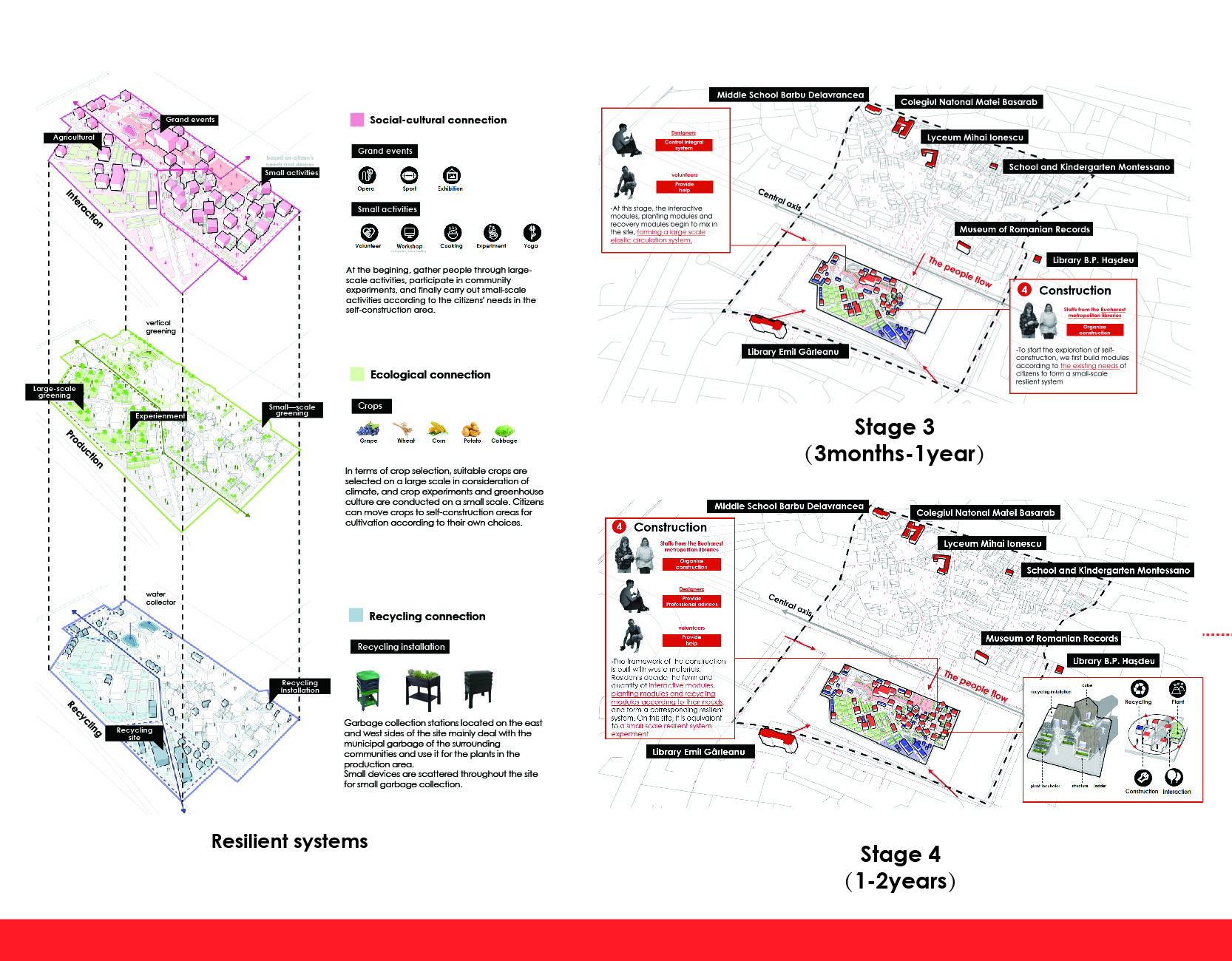 Plug-in City: Resilient system
Bucharest has formed a large number of collective housing due to the historical reasons. This kind of community space limits the connection between people and people. We try to explorer a resilient mechanism in order to help the local residents to rebuild the connections.
In terms of strategy, we take full use of the vacant space in the site to conduct temporary practice and test the resilient circulation system. The experiment will be carried out in four stages and form a set of resilient system modules which can be used at any space of the city. We hope that these modules will be like plug-ins to accelerate and improve the operation of the city. 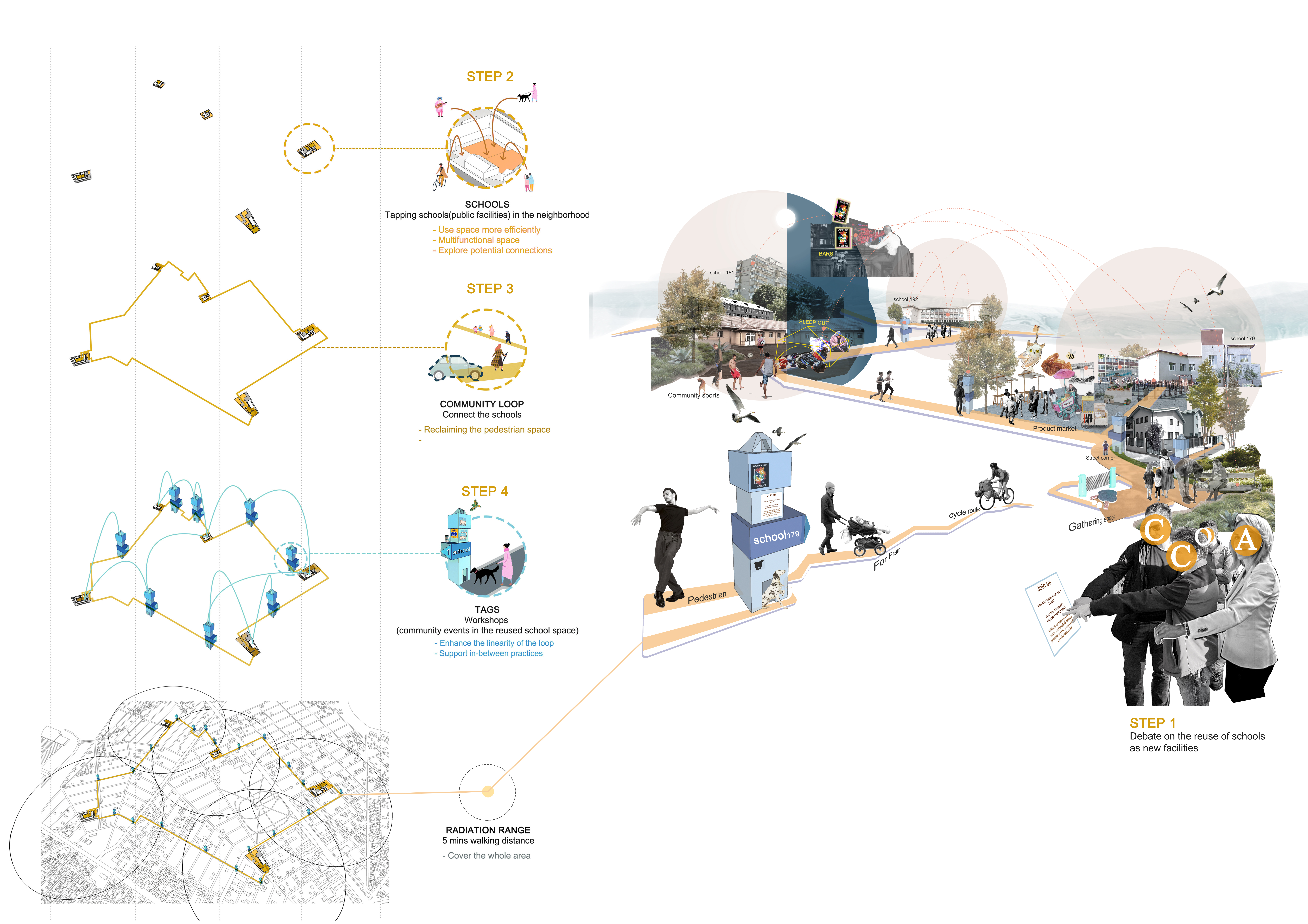 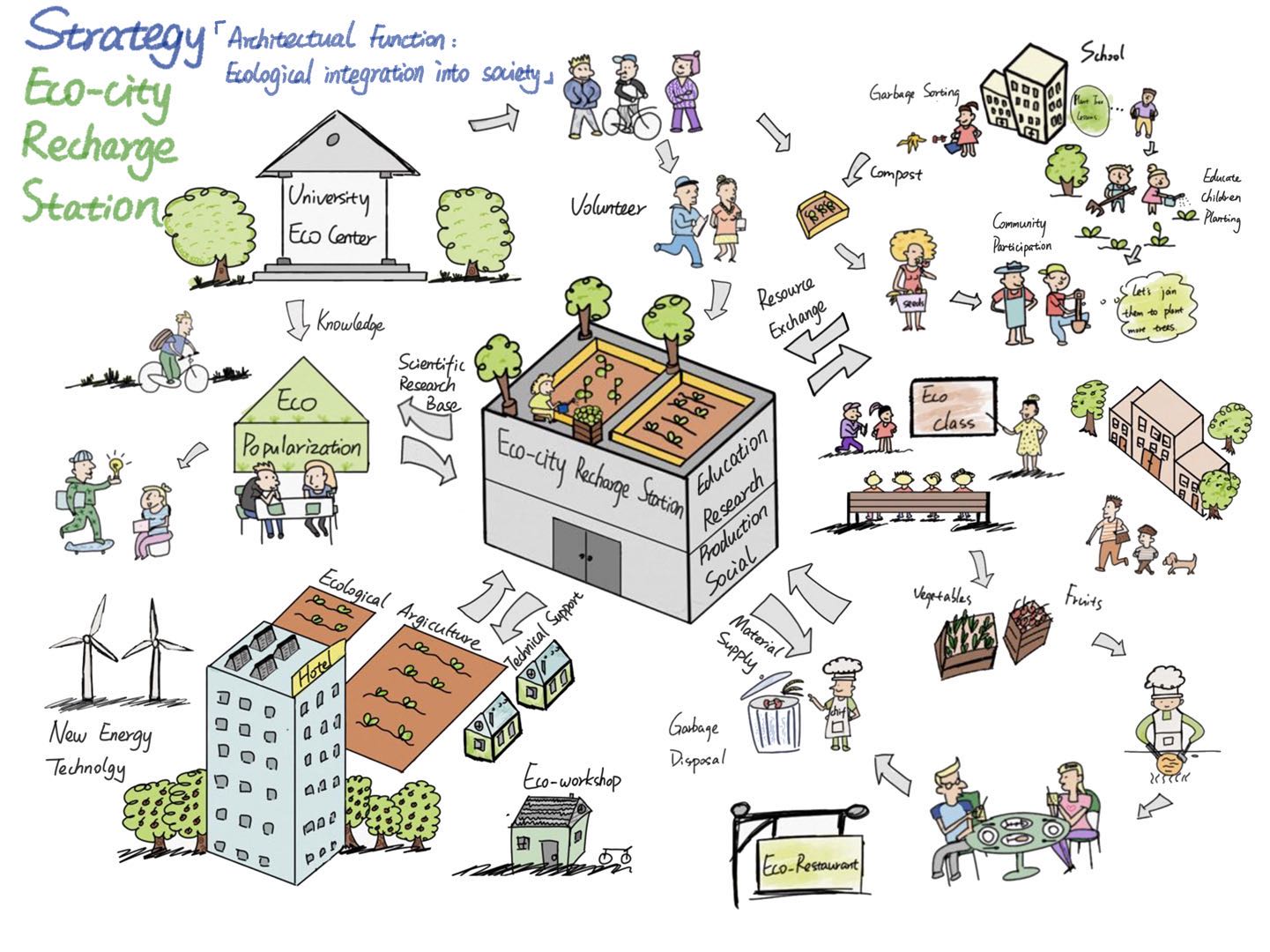 ECO-CITY Recharge Station
ECO-CITY RECHARGE STATION provides the organizer of all the ecological activities mentioned in our strategy in the community center. He is a community service center, an ecological organization, a mediator, and organizes and maintains a sustainable balance among
stakeholders.
Bucharest South: Creative District
The project aims to expand on the existing creative industry that exist in the region south of Bucharest. To achieve the goal, we looked at the liminal spaces around the neighborhood and proposed a series of strategic interventions that would transform these spaces into a functional and communal playground where people could interact with each other. The transformation is based on the existing actors in the context to ensure that everyone is able to participate during the development process. These spaces will be connected to each other via seasonal activities planned around the neighborhood that require the people to be engaged with. 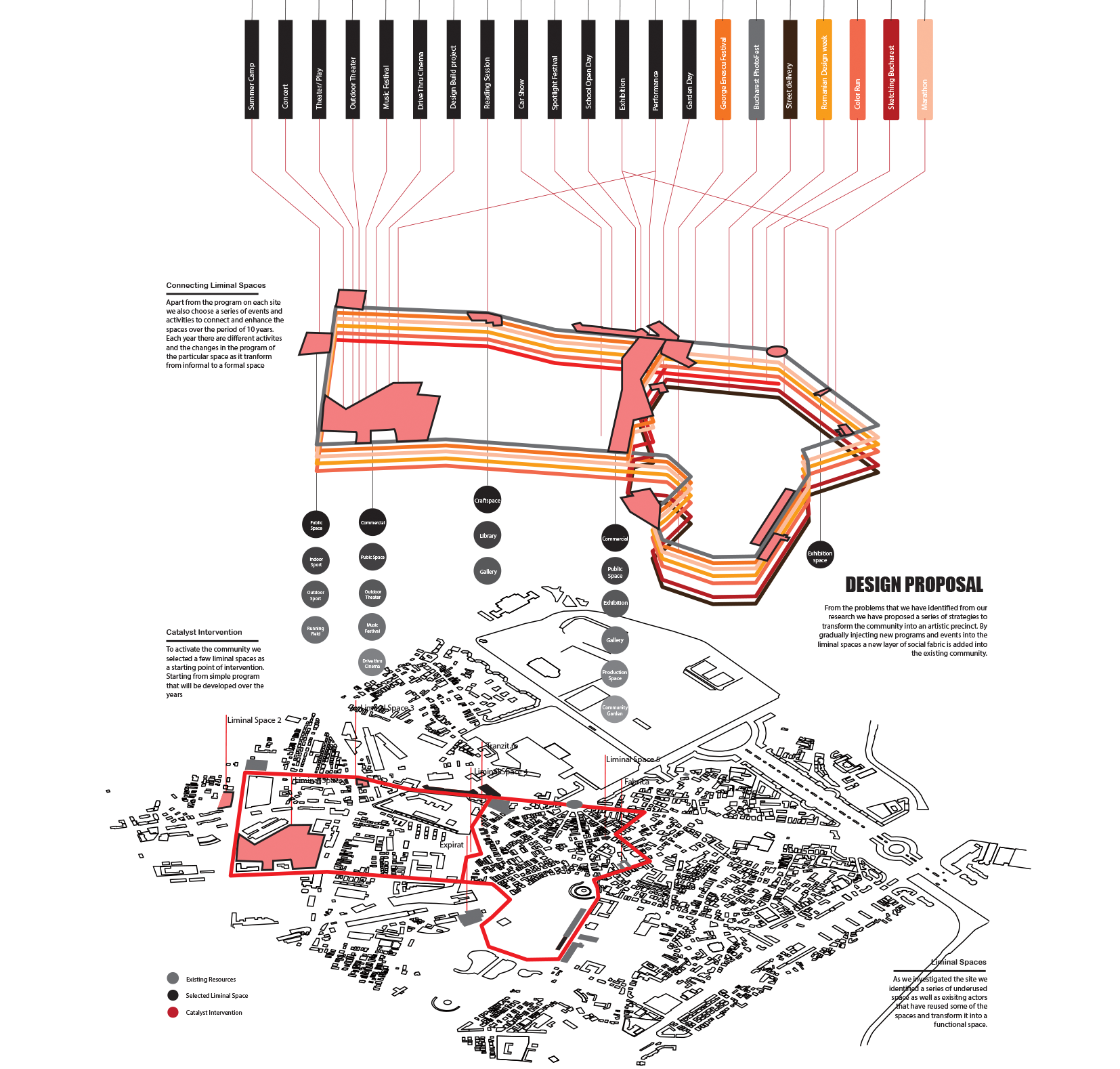 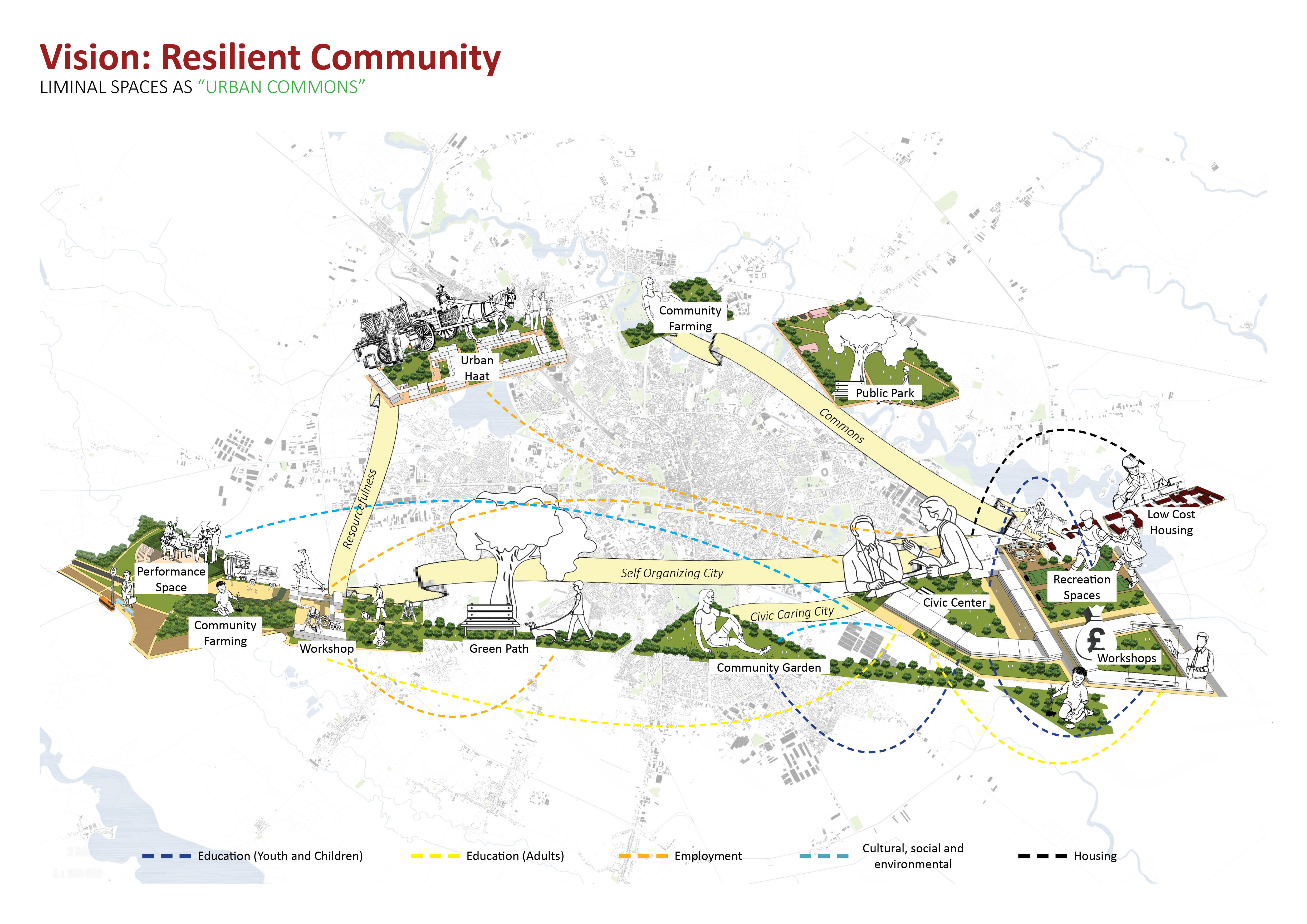 Liminal Spaces as Urban Commons
Our project aims are to create urban commons in Ferentari neighbourhood that will aid in generating jobs and income, along with developing the sense of community and integrating the Roma people with the city. With these we hope to address the mainly social problems that this community faces, such as vulnerability of its citizens, informal settlements, racial discrimination and others. Our goal is also to reconnect this are with the city in a physical way as well as economical-social-politically. We also base our aims with concepts of resilience that we studied in Studio 1 such as resourcefulness, civic caring and common goods. 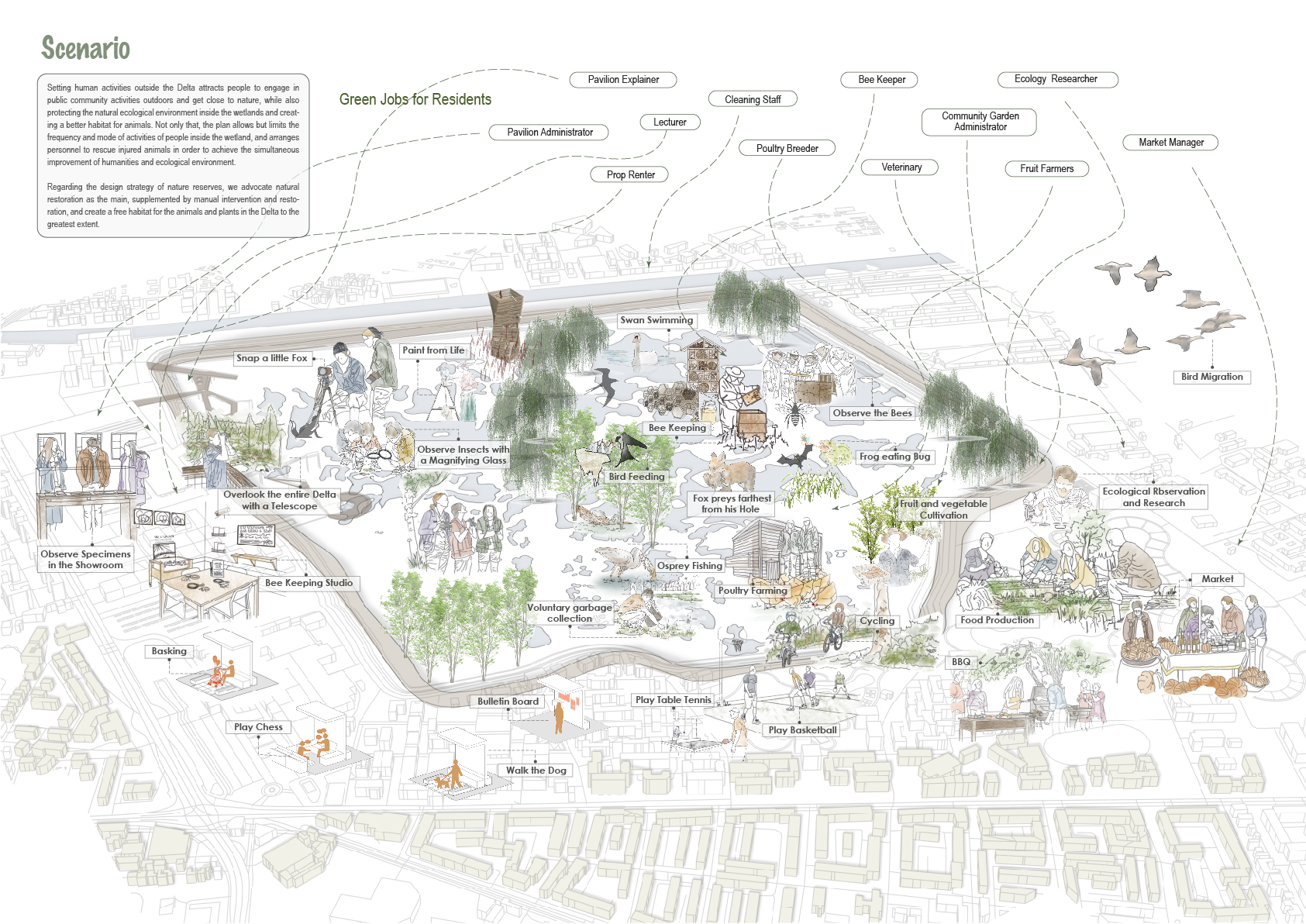 Vacaresti Natural Park: A Symbiotic System of City and Nature
With thanks to the students:

Future Community Place Making in Mogosoia
Citizens in this area are plagued by problems such as traffic jams, insufficient educational resources and job-housing balance. These urban problems not only reduce the quality of daily life of residents, but also affect their sense of pride and identification with the community. We try to build a service system that meets the needs of the local society in a sustainable manner to reduce the residents' dependence on the city center. So we designed the community center and let it form a triangular system with Mogosoaia palace and Green mogo, and then combined with the new public transportation system to form a 15-minute life circle system. While solving local social problems, attract citizens to participate in the construction of the community and enhance their participation and identity in the community, so as to enhance the resilience of citizens. 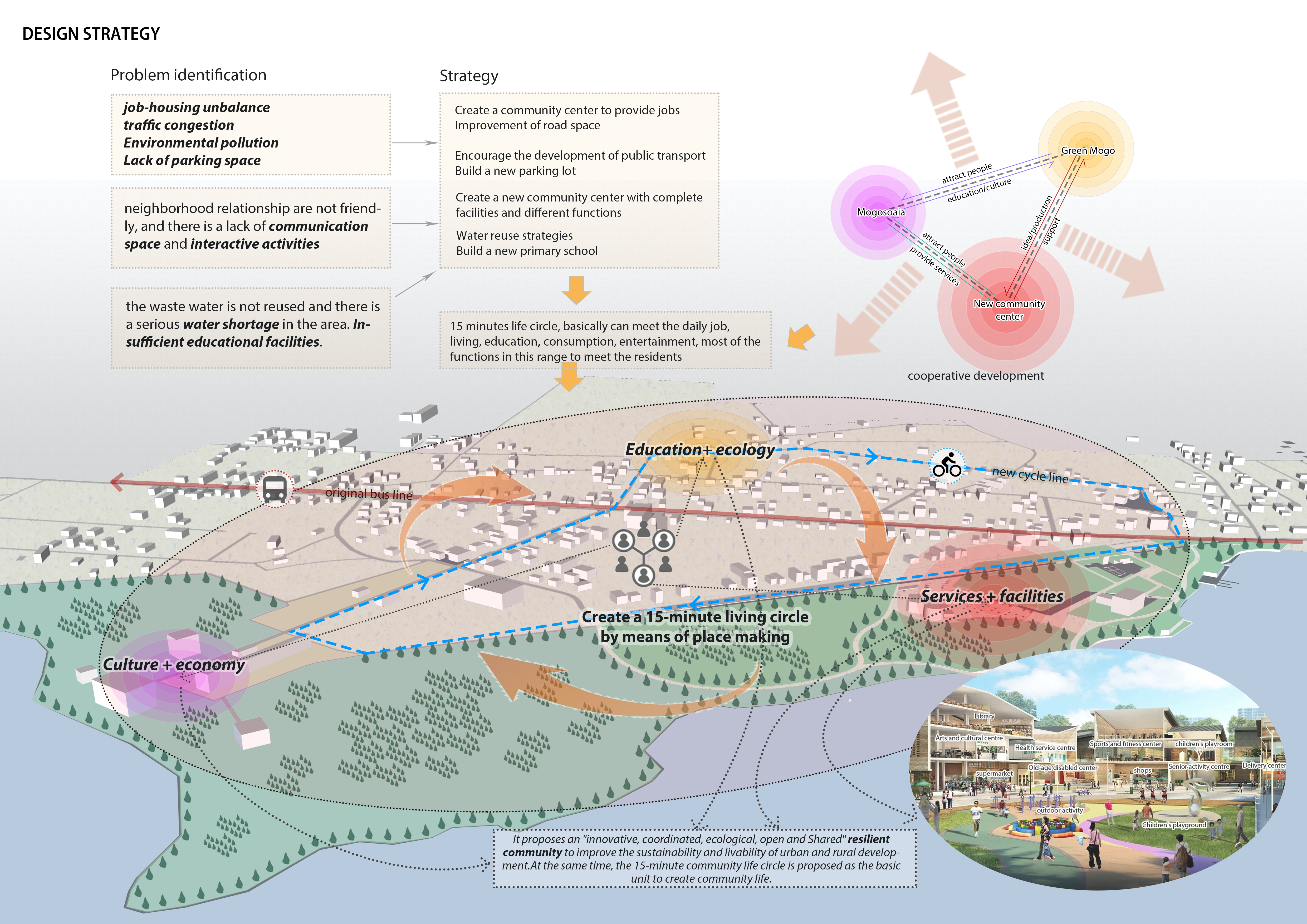 In the area, Vacaresti Natural Park, Bucharest. During the long historical changes, the delta gradually became a large informal green space, covering about 180 hectares in sector 4. In order to better cope with climate change and support the citizens here, we propose our design goal as forming ‘A Symbiotic System of City and Nature’ between human and non-human. Our overall design strategy is to protect the delta from too much human activity, as well as to repair its own ecosystem, providing a better living for the citizens and non-human creatures. Meanwhile, we suggest nearby people getting together to create facilities and do green jobs to serve nature.