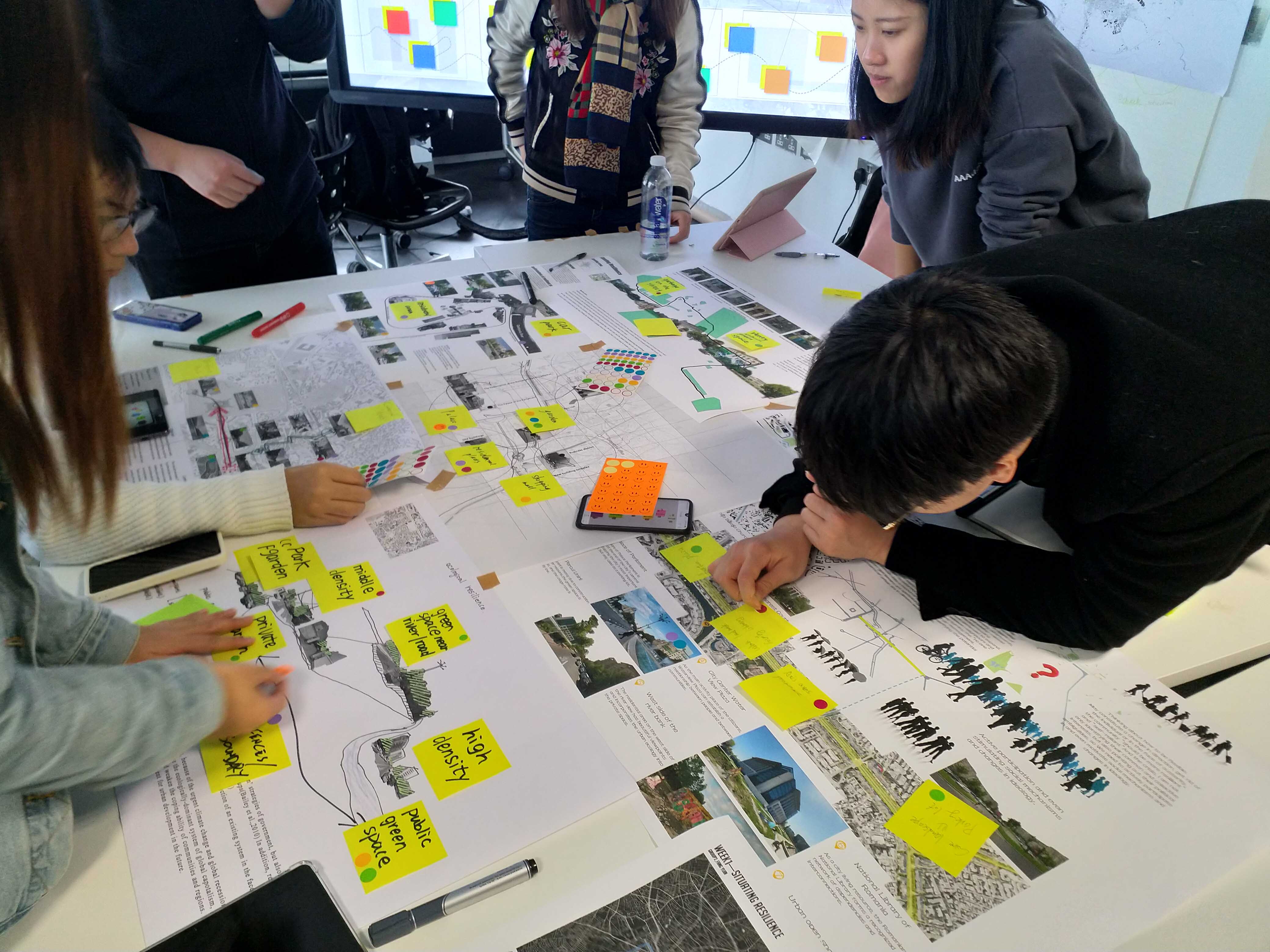 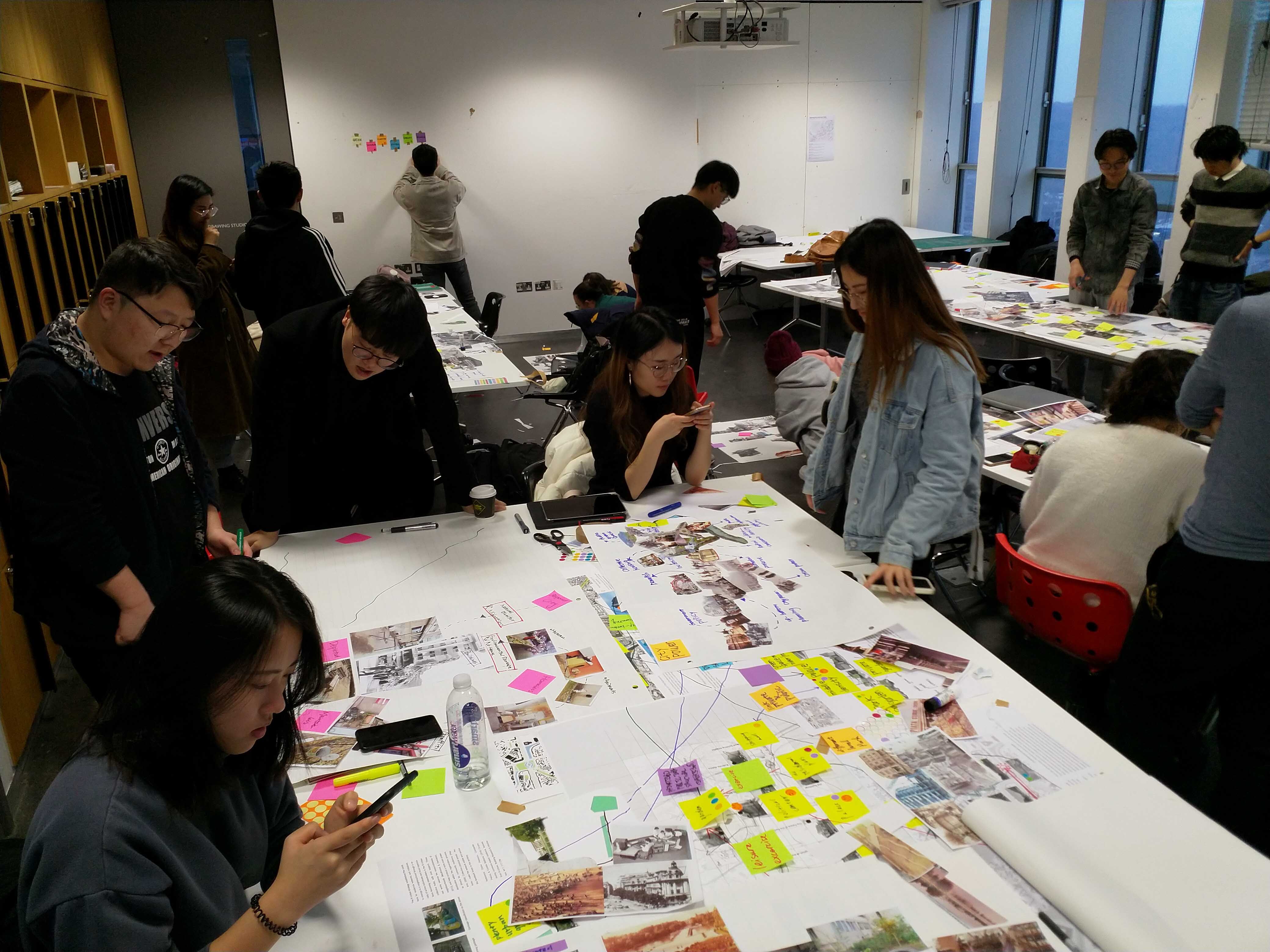 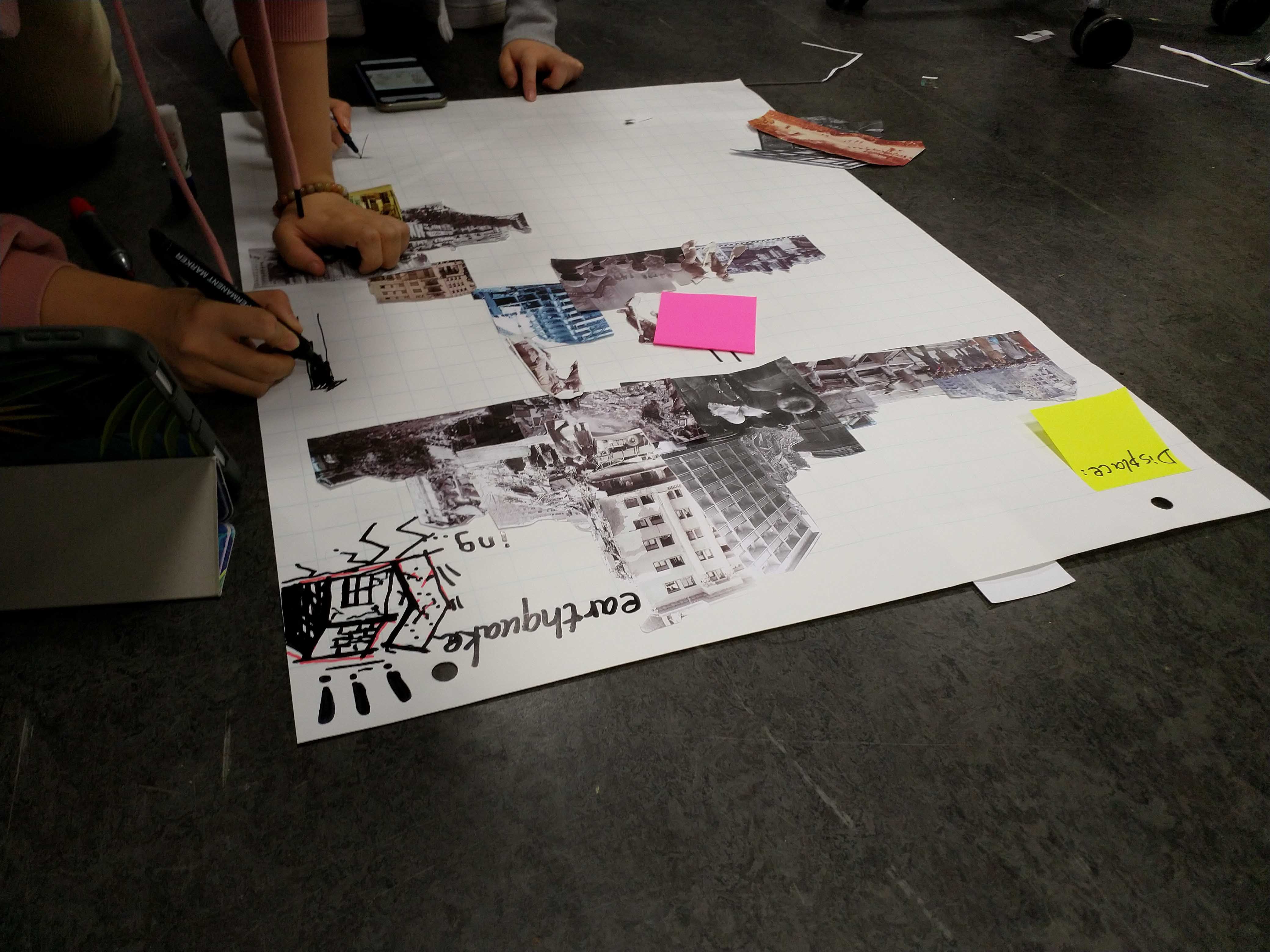 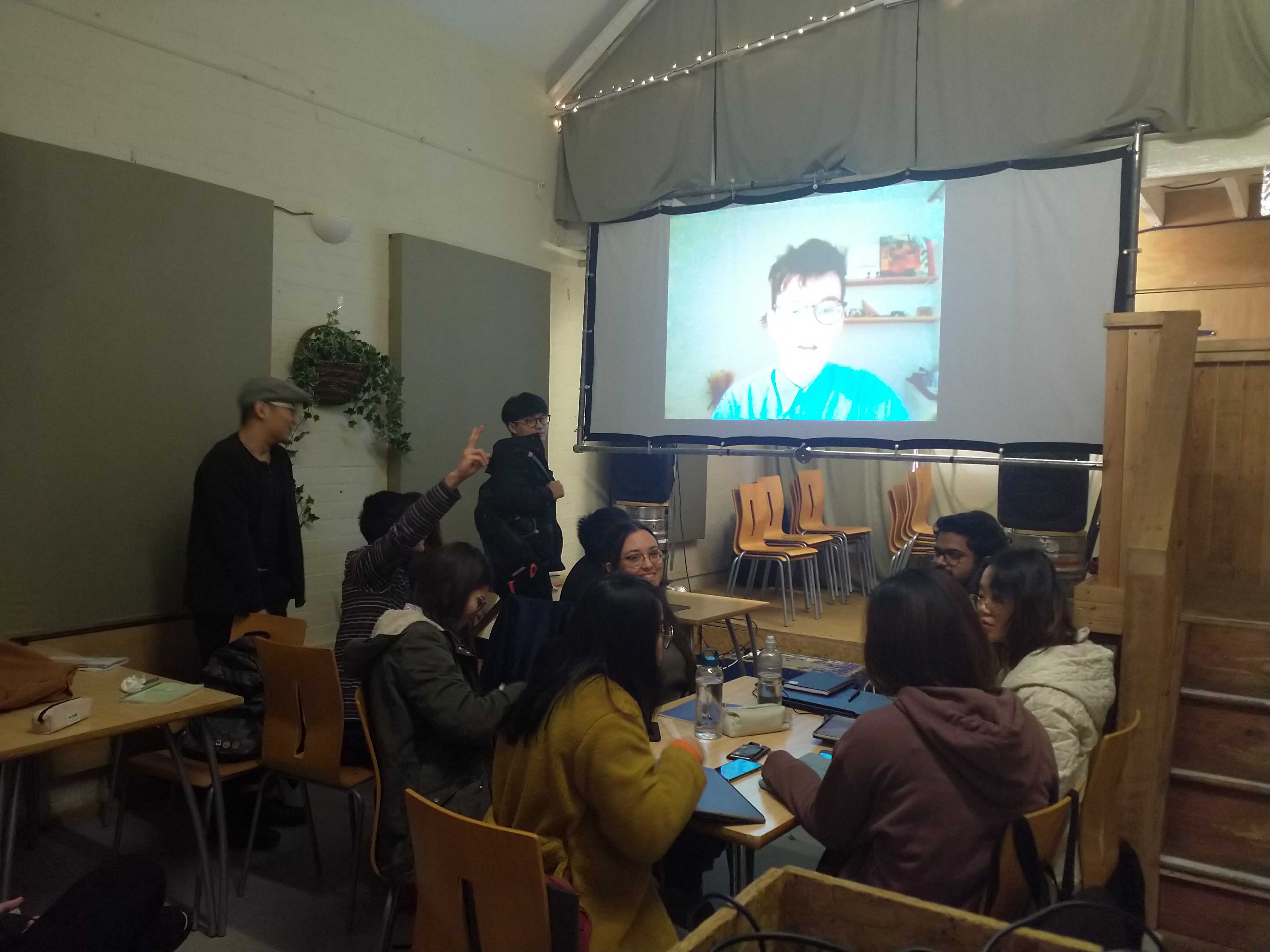 The studio explores methods of 'engaging' with the city of Bucharest, first from the remote location of Sheffiled, UK, using case studies and digital methods as a window into 'neighbourhood resilience' practices (Petrescu et al, 2016). This was folowed by an intense 1 week period of field research in Bucharest, using knowledge exchange with case studies, and an interactive exhibition with citizens to support design inverventions via scenario making (Bunschoten & Hoshino, 2001) throughout the city.

Using Google street view as a digital tool for walking neighbourhoods aross Bucharest chosen because of their relation to case studies. We became voyeurs of everyday life in the city, attempting to link our reading on citizen resilience with our initial observations of 8 neighbourhoods. Representations here formed an initial mapping of the 'Resilient City' and a taxonomy of resilient scenarios.

READING [and writing] THE CITY

Our mapping therefore, was a constructivist's mapping of Bucharest, a narrative constructed from our reading, remote research and conversations with each other and represented through a collage of text and images.

In November 2019, a seminar was held in Bucharest between local civic actors and international academics from a variety of disciplines.

The case studies were analysed in terms of actors, actions, resources and locaility. Attmepting to take an Actor Network Theory (Latour, 2005) mapping approach.

A pamphlet was created and presented to each case study as a form of knolwedge exchange upon visiting them in Bucharest. 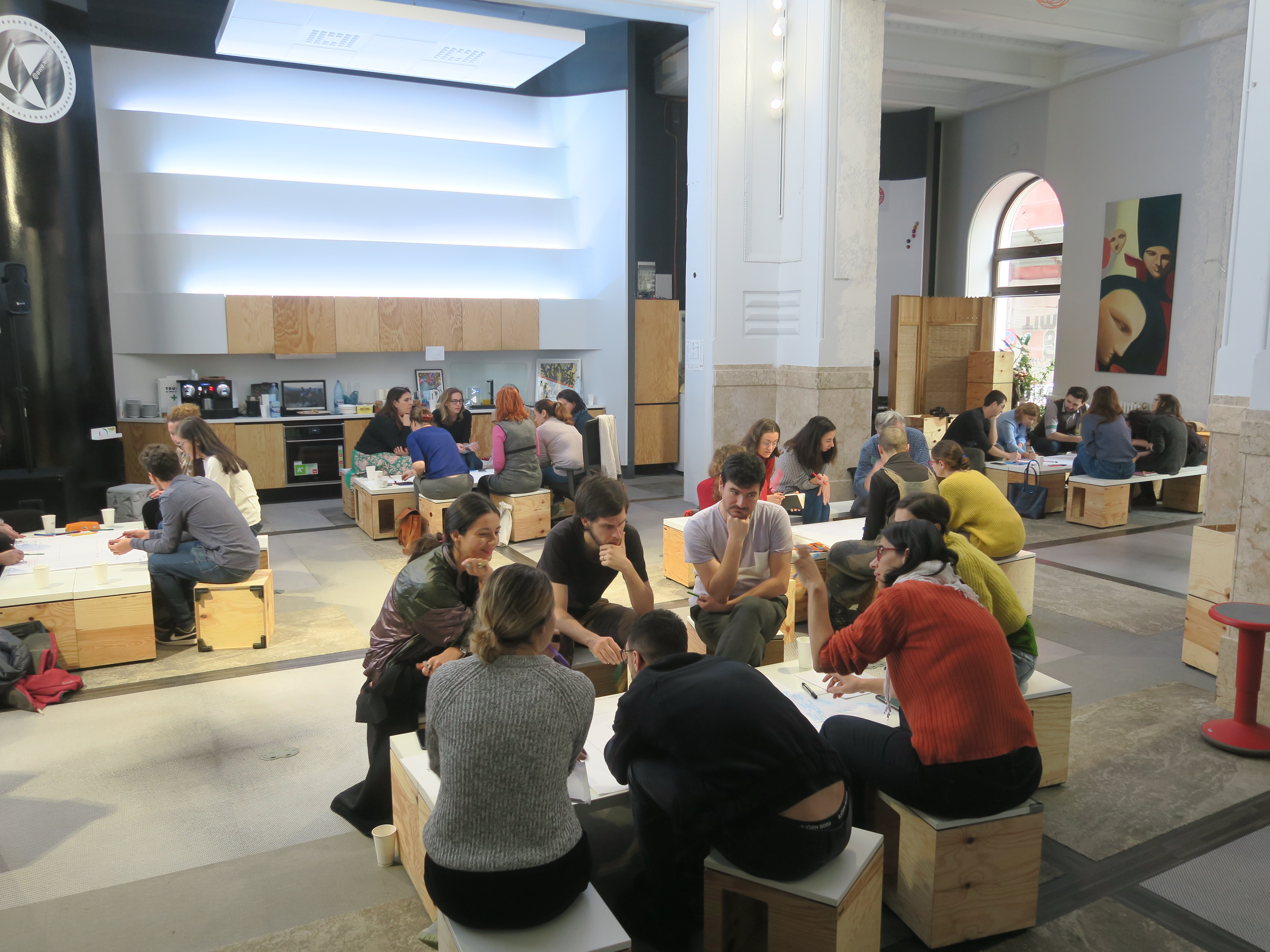 During a 1 week field trip in Bucharest, the students met and exchanged presentations, participatory material and 'live' design ideas with the case studies.

TThis method of engaging the case study in a conversation attemtped to give voice to the 'resilient citizen' of the city.

The week long field trip culminated in a participatory exhbition hosted at Adaptive Work Environment (AWE) Bucharrest central. The case studies, along with local interested citizens were invited to exchange ideas with the students, with the students field research used as an initiator for conversations. 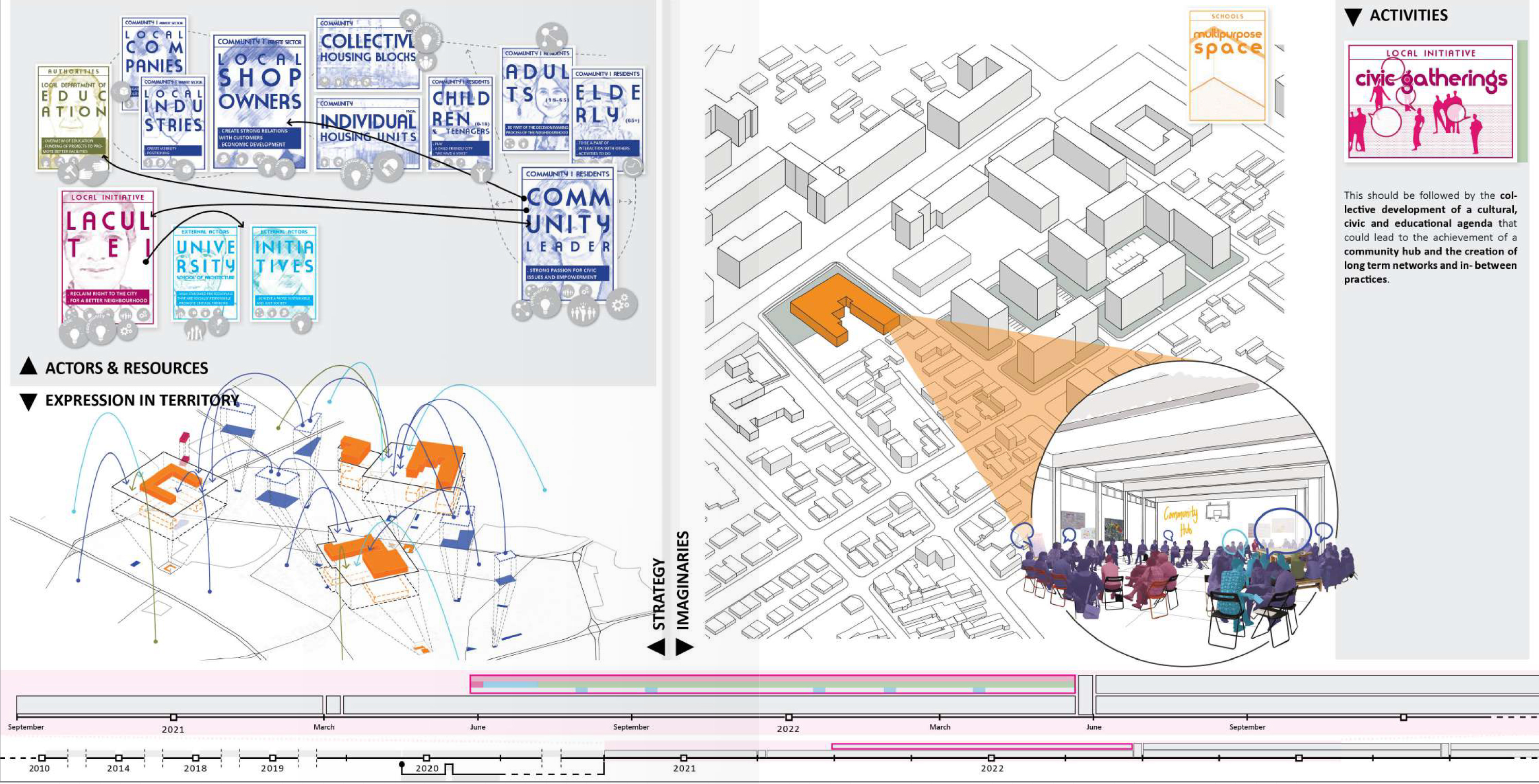 The scenario gives a temporal (time)
perspective to the project, something many
traditional architectural projects neglect. It can represent the process of the project and the parameters involved such as social/ ﬁnancial/political/ the ‘multiple aspects of society’ (Bunschoten, 2001). It can provide a way to ‘solicit participation’ and allow for other events and cultures to enter into urban design.

A scenario is more than simply a story over
time, it can be a means to test ideas, involve people in the process and situate your work in real life. 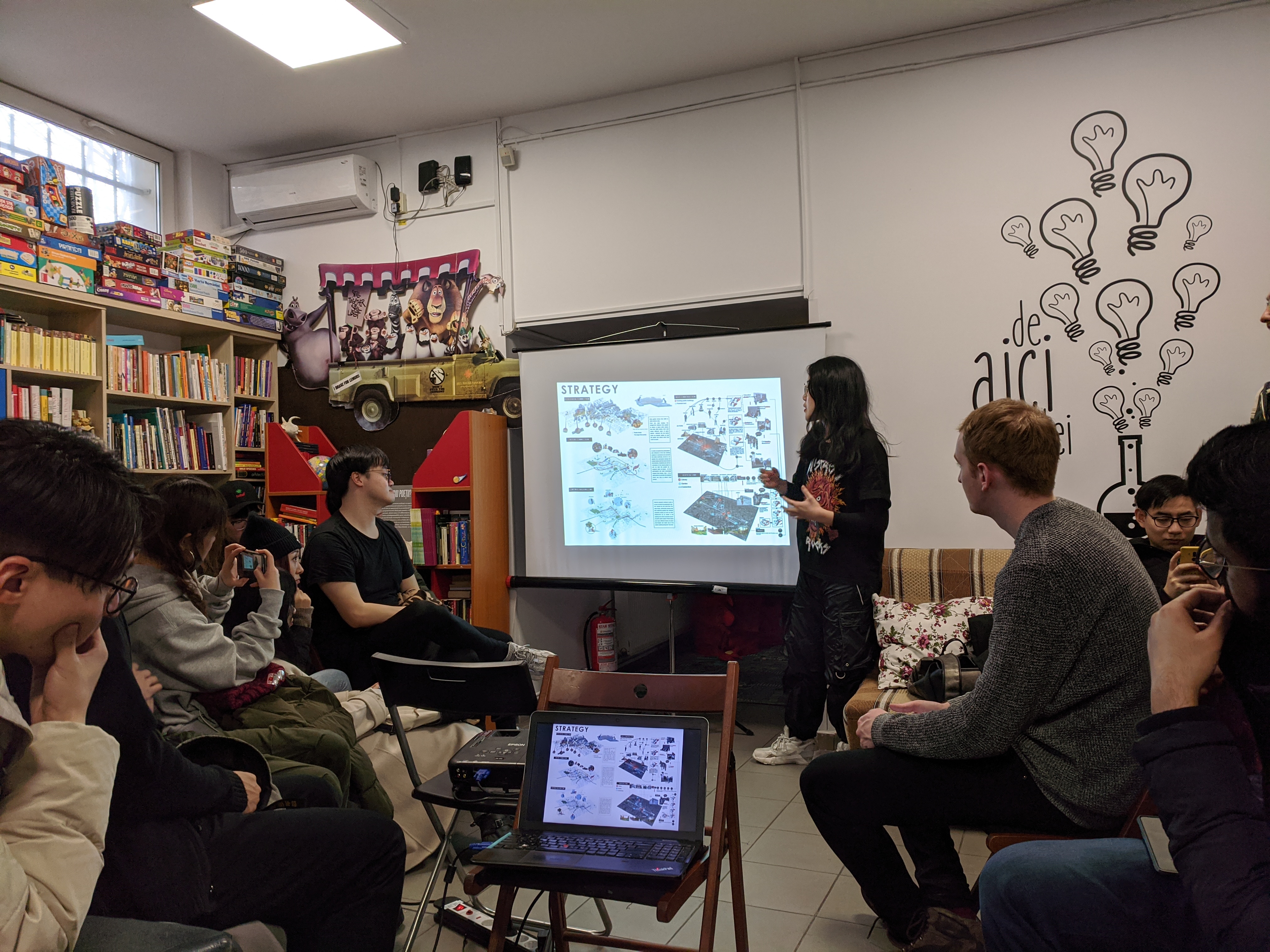 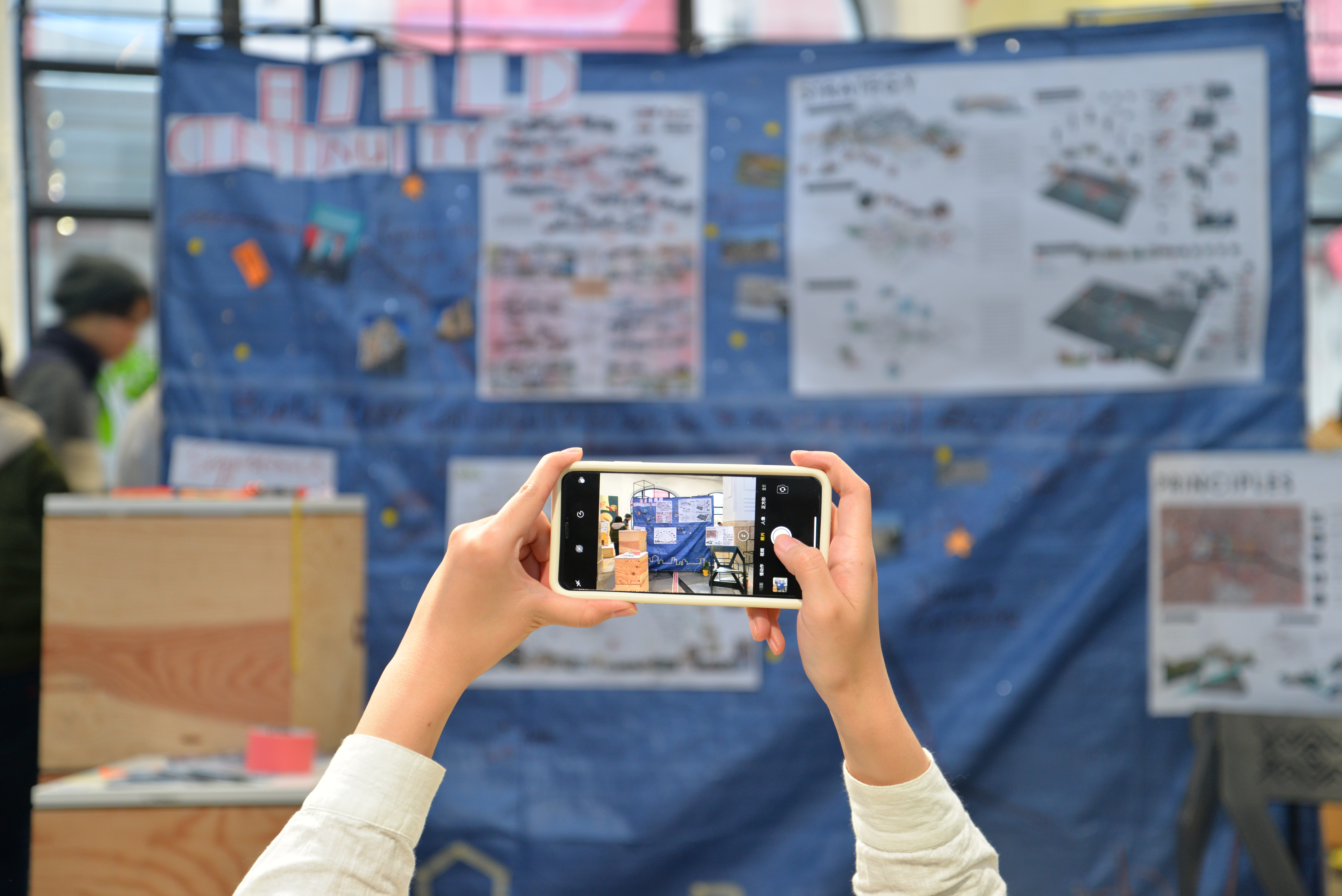 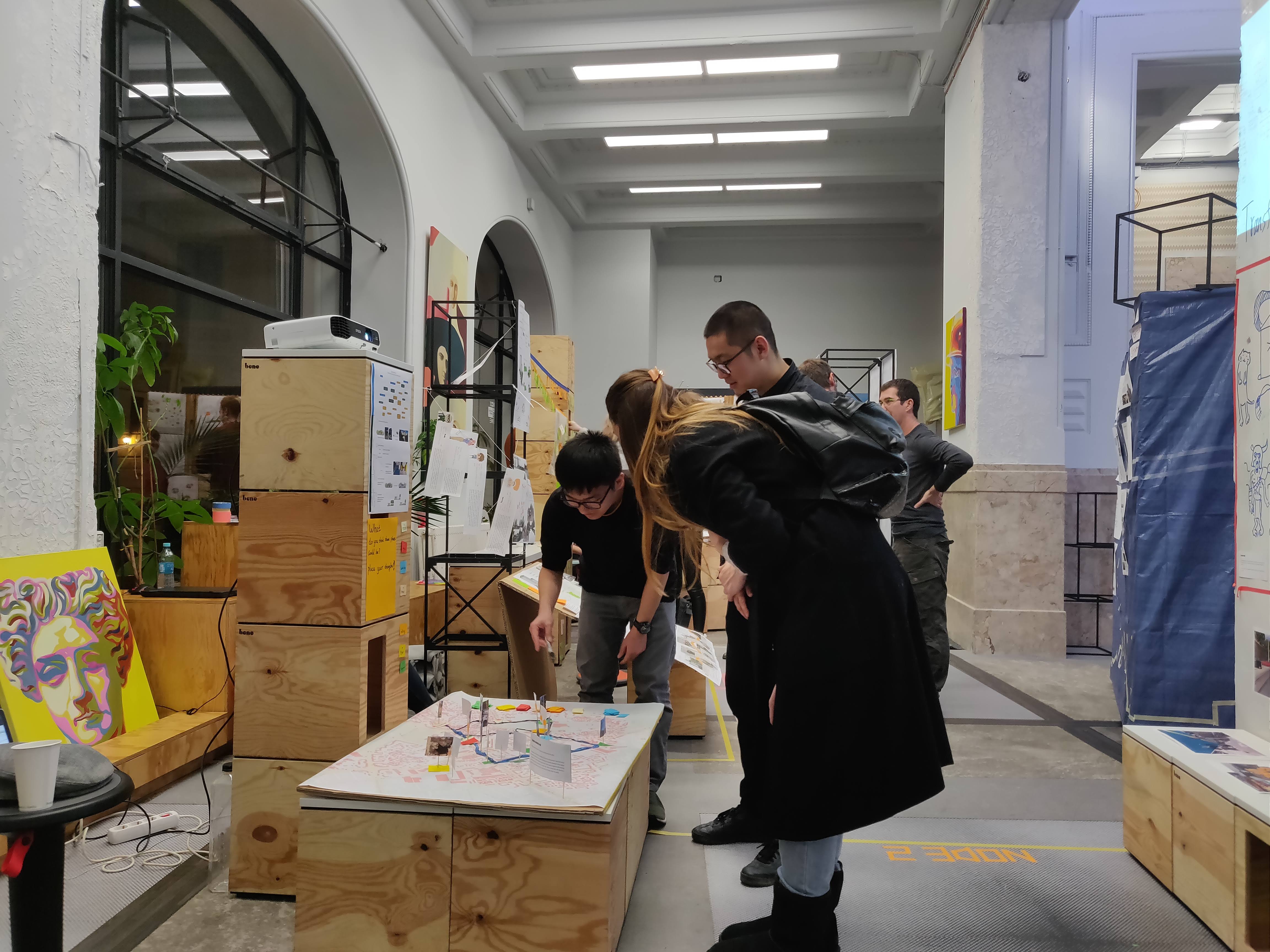 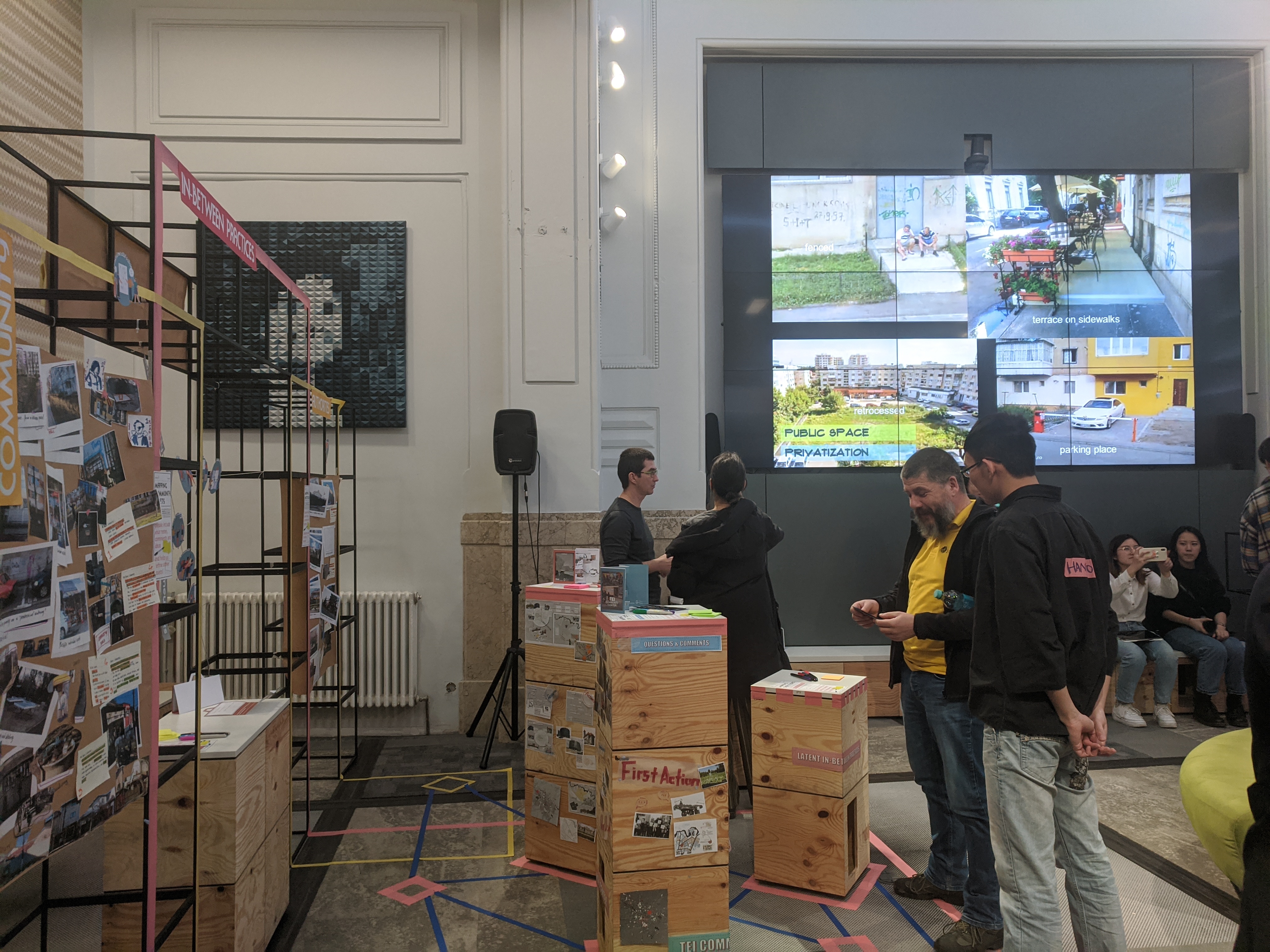 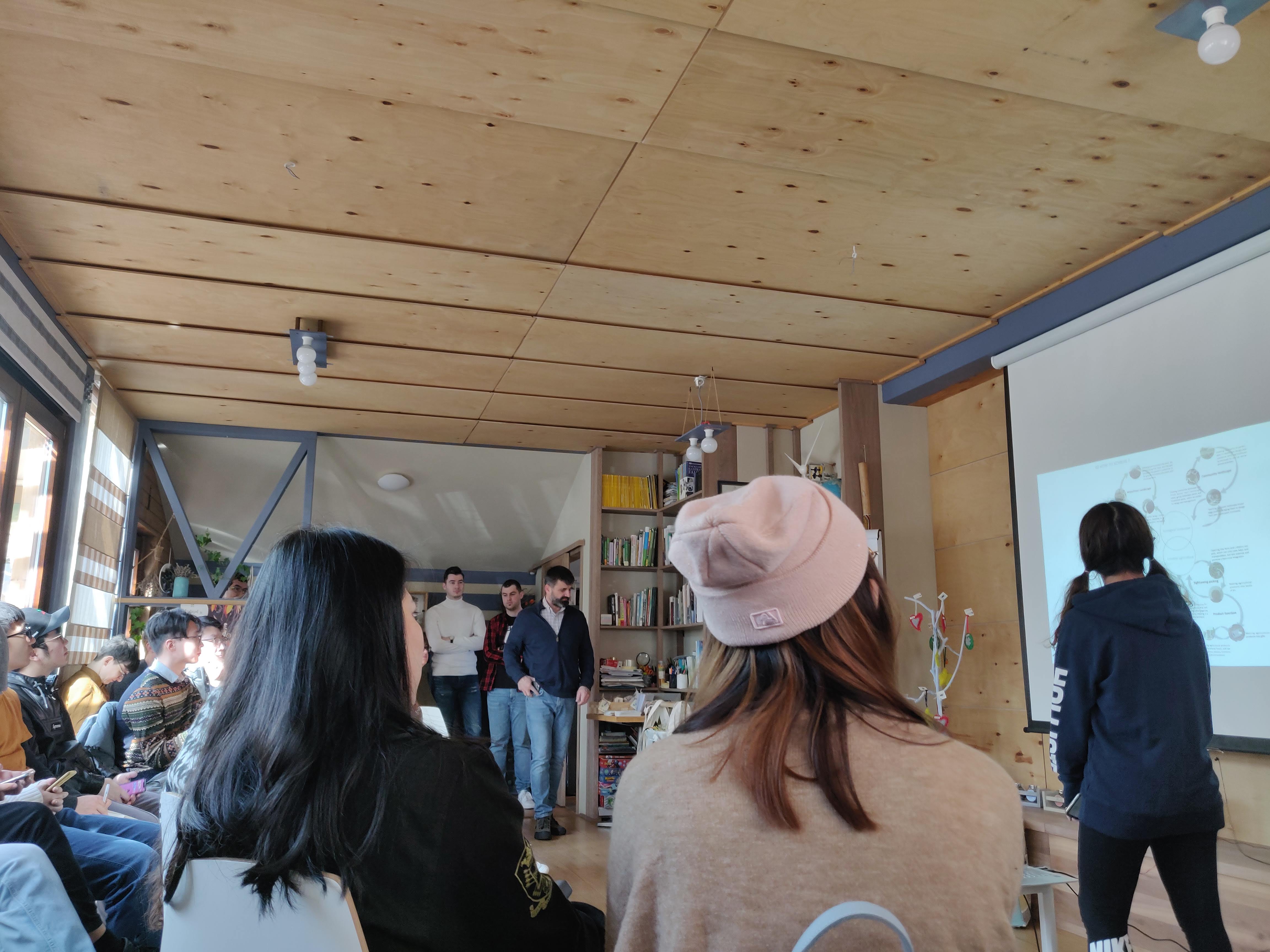 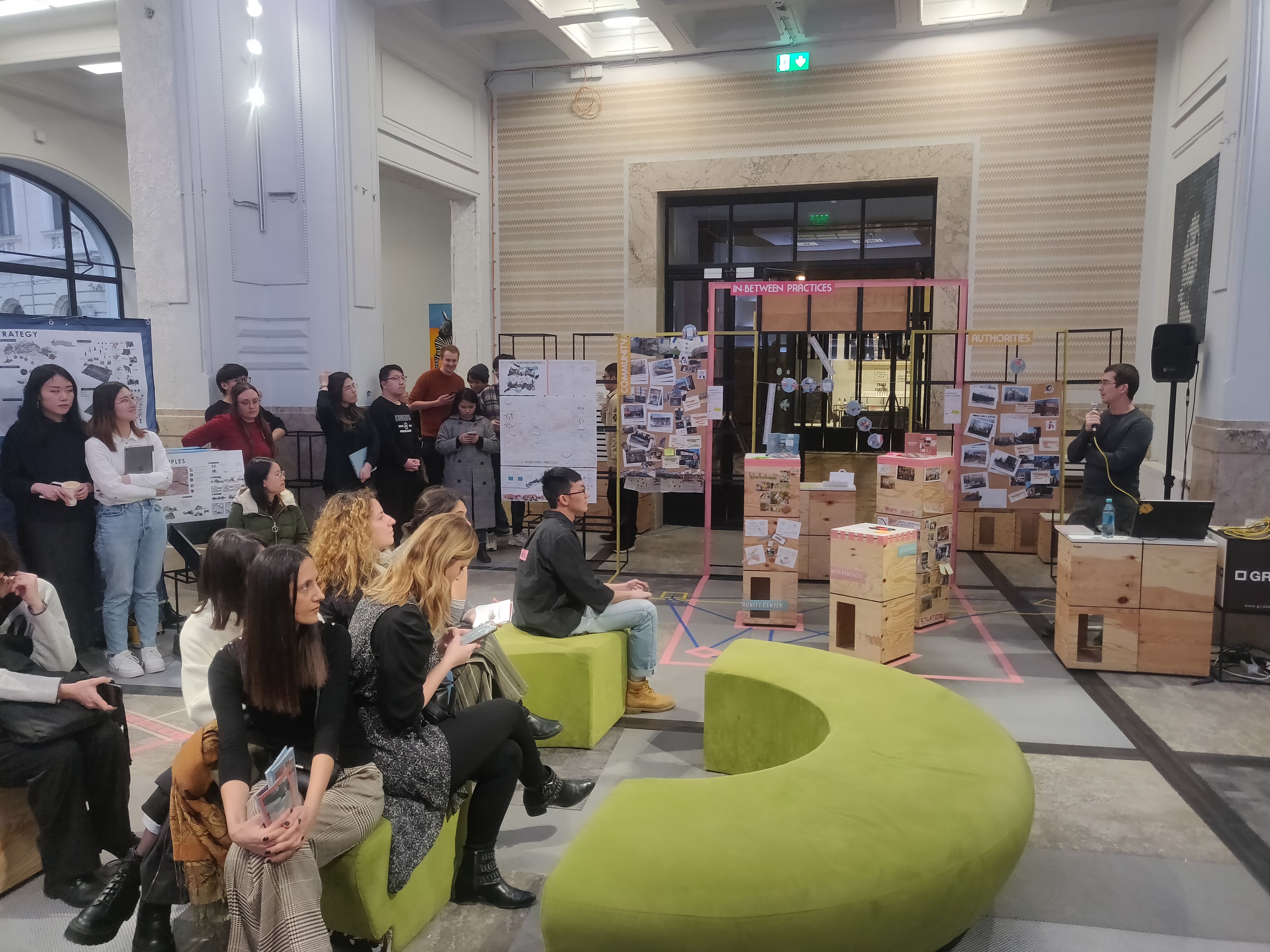